The Pioneer Saturn flyby in 1979 made several new discoveries about the rings:

The rings consist largely of particles several centimeters in diameter. They are extremely cold and possibly composed of frozen water and other ices.

An extensive cloud of hydrogen was discovered around the rings. 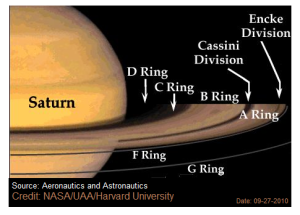 Two new rings (called F and G) were discovered, and a gap between rings was confirmed.

Voyager 1 provided much more detail on the beauty, complexity, and sometimes baffling nature of the rings. Among the discoveries were also debris dams and domes.

Most recent discoveries by Masoda 1 in 1988 confirmed similar appearance of Saturn rings which are made out of particles of rocks and frozen icy boulders.

The six known rings are actually composed of hundreds of tiny, thin ringlets with intervening spaces, so that the whole ring system looks something like the grooves in a phonograph record. Even the Cassini division, once thought to be empty space between the A and B rings, contains several dozen ringlets. There are far too many rings to be explained by our present theories of how planetary rings form and remain stable.

Elongated radial features that last from hours to days were observed in the Bring. These “spokes” may be clouds of electrified dust rotating around Saturn above the plane of the rings.

The thin outer F-ring, discovered by Pioneer Saturn, was resolved into three distinct but intertwined ringlets. This braided ring structure is very difficult to explain; it seems likely that both electrical and gravitational forces are at work.

Two small moons, one on each side of the F-ring, may act as “shepherds,” their gravitational attraction keeping the ring particles on track between the orbits of the two moons.