This plot shows the most recent polar satellite pass by the NOAA (National Oceanic and Atmospheric Administration) POES (Polar-Orbiting Operational Environmental satellite) indicating the current extent and the position of the auroral oval in the northern hemisphere, extrapolated from measurements taken.

The red arrow in the plot, that looks like a clock hand, points toward the noon meridian.

The statistical pattern depicting the auroral oval is appropriate to the auroral activity level determined from the power flux observed during the most recent polar satellite pass. The power fluxes in the statistical pattern are color coded on a scale from 0 to 10 ergs .cm-2.sec-1 (10ergs/cm²s) according to the color bar on the right. The pattern has been oriented with respect to the underlying geographic map using the current universal time, updated every ten minutes.

It is an expendable launch vehicle which can place remote sensing satellites into sun synchronous orbit (SSO) and small sized spacecraft into geostationary transfer orbit.

The Polar Satellite Launch Vehicle (PSLV) is a third-generation rocket launcher designed, manufactured and operated by the Indian Space Research Organization (ISRO).More information on this exploration performance are found on this website.

This presentation provides an estimate of the location, extent, and intensity of aurora on a global basis. For example, the presentation gives a guide to the possibility that the aurora is located near a given location in the northern hemisphere under the conditions that existed at the time of the most recent polar satellite pass.

Readings from NOAA POES can be found from this website directory. 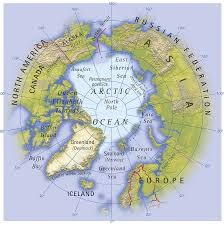 The Arctic Ocean is located in the Northern Hemisphere, which is closely in the Arctic north polar region, it’s the smallest, and shallowest of the world’s five major oceanic divisions. The International Hydrographic Organization (IHO) recognizes it as an ocean, although some oceanographers call it the Arctic Mediterranean Sea or simply the Arctic Sea, classifying it as one of the Mediterranean seas of the Atlantic Ocean. Alternatively, the Arctic Ocean can be seen as the northernmost pole of the all-encompassing World Ocean.

Almost completely surrounded by Eurasia and North America, the Arctic Ocean is partly covered by sea ice throughout the year (and almost completely in winter). The Arctic Ocean’s temperature and salinity vary seasonally as the ice cover melts and freezes; its salinity is the lowest on average of the five major oceans, due to low evaporation, heavy freshwater inflow from rivers and streams, and limited connection and outflow to surrounding oceanic waters with higher salinities. The summer shrinking of the ice has been quoted at 50%. The National Snow and Ice Data Center uses satellite data to provide daily record of the Northern and Southern Hemisphere indicating areas of specific interest such as the Arctic sea ice cover and it’s rate of melting compared to an average period and specific past years.

Learn to ditch that 9-5 and be your own boss.

Helping You to Make Money Online

The Place for Southern Politics

A blog full of tips, inspiration and freebies!

Turn Your Passion Into Your Business Online

Tips and Tricks To Increase Your Cashflow

Your How To Guide To Internet Marketing

Learn How To Make Money Online

We Review so You can Decide

WFLA News Channel 8 On Your Side in Tampa Bay Florida

A Note From Abroad

“Twenty years from now you will be more disappointed by the things that you didn’t do than by the ones you did do. So throw off the bowlines. Sailaway from the safe harbor. Catch the trade winds in your sails. Explore. Dream. Discover.” ~ Mark Twain

Tales of humour, whimsy and courgettes

Learn All About Crypto Currency

The heavens are telling the glory of God; and the firmament proclaims His handiwork. Psalms 19:1

A Site Dedicated To Everything Pigeon