Mars is the fourth planet from the SUN. Its half the size of the Earth and orbits the sun at a distance of about 142 million miles, spanding 687 days to do so. Mars is referred to as the Red Planet because of the reddish dust covering its surface. Mars has two moons called Phobos and Deimos, which are madeup of dense dusty formation reflecting the coloration of Mars. Many astronomers think that these odd-shaped moons are really asteriods that became trapped in orbit around Mars millions of years ago. 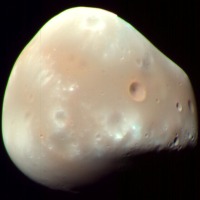 In the 60’s and 70’s, the Mariner and Vikings space probes sent back detailed pictures of the surface of Mars. The most recent successful Mars missions called Mars Pathfinder and Mars Global Surveyor were launched in 1996. The Surveyor craft was use for sending images and information from Mars. The vehicle carried by the Pathfinder is named Sojourner. This vehicle roamed over Mars planet’s surface taken photographs and performing certained programmed studies which were transmitted into earth. 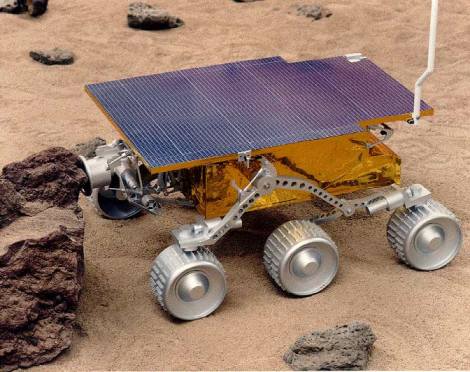 Another hypothesis is that Mars was once surrounded by many Phobos- and Deimos-sized bodies, perhaps ejected into orbit around it by a collision with a large planetesimal. The high porosity of the interior of Phobos (based on the density of 1.88 g/cm3, voids are estimated to comprise 25 to 35 percent of Phobos’ volume) is inconsistent with an asteroidal origin. Observations of Phobos in the thermal infrared suggest a composition containing mainly phyllosilicates, which are well known from the surface of Mars. The spectra are distinct from those of all classes of chondrite meteorites, again pointing away from an asteroidal origin. Both sets of findings support an origin of Phobos from material ejected by an impact on Mars that reacted in Martian orbit, similar to the prevailing theory for the origin of Earth’s moon.

The motions of Phobos and Deimos would appear very different from that of our own Moon. Speedy Phobos rises in the west, sets in the east, and rises again in just eleven hours, while Deimos, being only just outside synchronous orbit, rises as expected in the east but very slowly. Despite its 30 hour orbit, it takes 2.7 days to set in the west as it slowly falls behind the rotation of Mars, and has long again to rise.

Both moons are tidally locked, always presenting the same face towards Mars. Since Phobos orbits Mars faster than the planet itself rotates, tidal forces are slowly but steadily decreasing its orbital radius. At some point in the future, when it approaches Mars closely enough, Phobos will be broken up by these tidal forces. Several strings of craters on the Martian surface, inclined further from the equator the older they become, suggesting that, there may have been other small moons that suffered the fate expected of Phobos, and also that the Martian crust as a whole shifted between these events. Deimos, on the other hand, is far enough, away that its orbit is being slowly boosted instead of, as in the case of the earth’s Moon.

Learn to ditch that 9-5 and be your own boss.

Helping You to Make Money Online

The Place for Southern Politics

A blog full of tips, inspiration and freebies!

Turn Your Passion Into Your Business Online

Tips and Tricks To Increase Your Cashflow

Your How To Guide To Internet Marketing

Learn How To Make Money Online

We Review so You can Decide

WFLA News Channel 8 On Your Side in Tampa Bay Florida

A Note From Abroad

“Twenty years from now you will be more disappointed by the things that you didn’t do than by the ones you did do. So throw off the bowlines. Sailaway from the safe harbor. Catch the trade winds in your sails. Explore. Dream. Discover.” ~ Mark Twain

Tales of humour, whimsy and courgettes

Learn All About Crypto Currency

The heavens are telling the glory of God; and the firmament proclaims His handiwork. Psalms 19:1

A Site Dedicated To Everything Pigeon